Australian rainbowfish also called Murray River rainbowfish, commonly lives in fresh water of Australia. This fish has vibrant colors, & male of this specie is more colorful as compared to female. The name rainbowfish implies that this fish is colorful. Larger adult rainbowfish show more beautiful colors as compared to smaller one.
Rainbowfish can reach a height of 11 cm, but normally male of this specie can achieve a maximum height of 8.5 cm while females usually achieve up to 7 cm height. Their bodies are elongated, & they have a tiny head with large eyes.
They are omnivores in behavior. They eat aquatic & terrestrial invertebrates & also algae. They love to swallow live foods, along with flakes.
This is one of the popular specie in Australia. Australian rainbowfish lives in Australian rivers & fish from different rivers often show different colors. 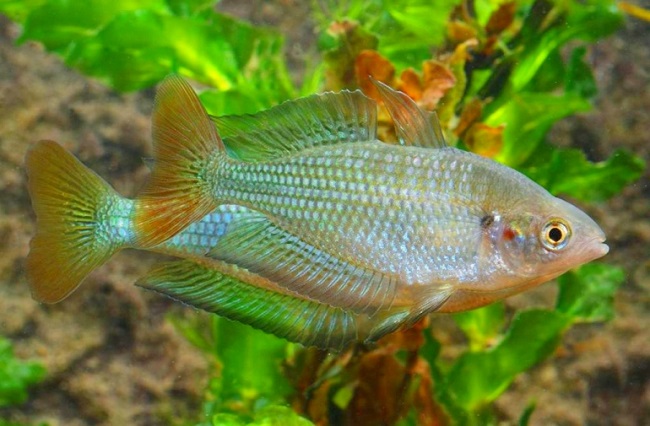 photo© Gunther Schmida
Rainbowfish is one of the top choice for novice. Due to their hard nature, they are not prone to a lot of illnesses as compared to other tropical fish.
They are sturdy & they can be discovered in many habitats such as streams, rivers, lakes, ponds, swamps & reservoirs.
Rainbowfish lives in River Murray & hence they are known as River Murray Rainbowfish. However, you can find them in other rivers & lakes. They can live for 6 years or more.

Rainbowfish is hard & can endure in harsh environment. They can tolerate altering water conditions & are able to battle against illnesses. These fish are for beginners. They can live healthy in water with a neutral pH (from 6.5 – 8.5) & they need a little warm water (from 21 – 28 Celsius). However, they are able to survive even in low temperatures & people usually keep them in ponds. They can live healthy & happy if you are keeping them in pond with lots of free space for swimming. Also if your pond looks natural then it is the ideal place for them. It is suggested to use a sandy substrate in your pond, with plants, & additionally you can keep wood to offer them an environment similar to lakes. Also if direct sunlight is hitting your pond then the illumination can make Rainbowfish even more beautiful. A good filter & water movement is required for the male of rainbowfish to develop colors.
If you are keeping vegetation in pond then make sure to select plants that can tolerate the tough conditions imposed by rainbowfish. A good filter is required that can clean the water & offer biological filtration which can add good bacteria. Biological filtration will change toxic ammonia released from waste into nitrite & then into nitrate which is less toxic & can be removed with regular water changes.

They are tough fish & can survive easily in clean water. It is suggested to change 25 to 50 percent water every week, if the aquarium is densely populated. They need at least 30 inches long aquarium because they are active swimmers. They have a habit of jumping so it is advisable to put a canopy on top of the tank to avoid them from escaping aquarium.
It is advisable to have a well planted tank with sandy substrate & wood to replicate the environment of rivers.
It is suggested to use hard plants in aquarium & rainbowfish also needs free space for swimming. Use a filter for cleaning water.

Like other omnivorous fish, Rainbowfish also need a good balance of diet for better health & beautiful colors. Feed them about 60 – 75% of high quality processed food, that is just the right diet for such fish. Their remaining diet contains live food. If you can’t find live food, then there is an option of feeding them frozen food that are available at fish stores. Feed them 2 – 3 times every day & just what they can digest in less than 5 minutes.
They can happily devour live & frozen foods. They love to eat frozen foods like tropical flakes, or live foods such as brine shrimp, ants, small worms & mosquito larvae.
They eat more plantation than most of the other tropical species. They love to eat vegetables too.

I suggest keeping at least 4 of Australian rainbowfish in a single tank. They live peacefully in water, & I recommend keeping them with non-aggressive species.
They love to live in groups & can be mixed up with other larger in size community fishes.
Do not keep rainbowfish with tiny fish including neon tetra or guppies.
Rainbowfish can be kept healthy & happy in a tank with fish of similar sizes but they do great in an aquarium with more rainbowfish. Keep them with fish that love to swim & are playful but have good temperament for perfect outcomes. These fish are also chasing one another which is not a problem, but if one of rainbowfish is hurt, has no place for hiding, & is frequently chased then this can be a problem. Do not put rainbowfish with slow swimmers or lazy mates.
It is advisable to keep rainbow fish in company of 6 or more, & keep them in better gender ratios so that they live in peace.
If you are keeping rainbowfish with more fish in pond, then make sure there are enough hiding regions. If they have difficulty in finding a hiding place, then it is improbable to get the most of the colors. You can see them in combination of different species that can hide in floating logs & vegetation when they are not interested in swimming as a team, so rainbowfish require the same condition in pond.

Their breeding time starts in spring when water temperature rises. When you increase water temperature of tank then it is the best condition for breeding. 1 female fish can lay around 150 eggs. They lay 5 - 20 eggs per batch, in 3 to 4 batches per day for over a few days. The fish spawn at the time of dawn & dusk.
The hatching time of the eggs is based on temperature, but normally eggs hatch in at least 5 days. In cold temperatures, they will need more time to hatch.
Rainbowfish can easily give birth to baby fish. People breed them at homes in aquariums or ponds.

It is advisable to have a filter in pond if you are planning to breed rainbowfish. Also if there are enough vegetation then it can provide a better place for fries because they can rest & play when they want to. Add a pair of adult specie to your pond. Feed them a mix of live & plant based food.
Sign In or Register to comment.