Top 10 Most Beautiful Betta Fish Categorized By Their Tails:

Betta fish also named as “Siamese fighting fish” or “labyrinth fish” battles against mates for its life. People keep them alone in bowls, flower vases, aquariums etc. Bettas are sensitive & complicated specie who suffer too much when exposed to mates. They have long fins & aggressive might nap its fins.
Bettas are famous freshwater specie. People like them because of their many different shapes & colors.

Betta fish look colorful in aquarium & do you know that there is a vast variety of betta fish available based on its different tail types so check out 10 best betta fish that have different types of tail. 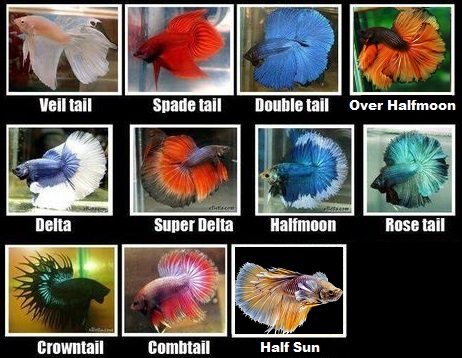 Betta fish having crowntails are the famous kind of betta. They have spikey fins which is very similar to that on top of a crown.
It is easy to recognize this betta fish because it has a lengthy fin’s rays & small webbing. If webbing reaches more than two third up the tail’s ray it is not a crowntail.

Combtail betta look like crowntails such that the tail’s rays are lengthy than the webbing. This feature is subtle in combtails betta fish. Combtail betta is a child of a crowntail & another tail type.
It has the shape of a crowntail, but has longer, thinner fins that provide a fresh look to its tail. It is the result of cross breeding 2 different betta tail types.

Double tail have 2 different tails which are separated to the base. They have a larger dorsal fin. Double Tail betta has been bred over years to get this type of tail & you can discover them in many colors.
Based on the initial kind of betta, it is the result of mutation that can make betta appear amazing, but they are shorter in size than normal betta & are prone to swim bladder illnesses. A lot of double tail betta childs die, so you might not have seen them in pet stores very often.

Spadetail betta fish is named after its clear spade like look of the caudal fin. Tail of spadetail betta has a wide base which narrows smoothly to a point.
Spade tail has been named after the spade of a card deck as the shape of the fish best look round & pointy.

Halfmoon betta is very popular & hobbyists want to have them in bowls or aquariums. It has a large tail & when spread the caudal fin will fan a 180 degrees which causes the tail to make a half circle - & the name of the fish is named due to that half circle.

Over-Halfmoon betta fish have similar fins like halfmoon bettas. The difference is that when tail spreads the caudal fin will fan over 180 degrees creating a shape that is larger than half a circle.
It can be obtained as a by product of attempting to breed half-moons, could be problematic at times because fish might not swim well due to too large fins.

A delta tail betta fish starts narrow towards the fish body & widens towards the tip offering it a triangular shape.
It has a large tail named after Greek letter d as its tail looks like letter delta (∆). The tail starts narrowing towards body & it spreads towards edges making a triangular shape.
Delta betta fish tail is like a half moon fin but tail of delta can’t reach 180 degrees.
The most common difference b/w veiltail & delta is that if you draw an imaginary line horizontally across the mid of a betta then you will have an even amount of tail above & below the horizontal line. Veiltail betta has most of its tail located below this horizontal line.

Half Sun betta fish has a tail made up of a combination of crowntail & halfmoon. The outcome is a long tail that spreads 180 degrees along with little crowning b/w the fins rays & webbing.
This tail type of betta is the result of breeding half moons & crowntails. Tail of child reaches more than 180 degrees around the body.

Rosetail looks similar to halfmoon. The former looks different than the latter tail because of excessive branching on fins rays which produces overlapping in fish fins creating a rose like appearance.

Tail rays are usually branchy which provides a striking appearance to betta & makes the caudal fin look similar to rose.
Sign In or Register to comment.