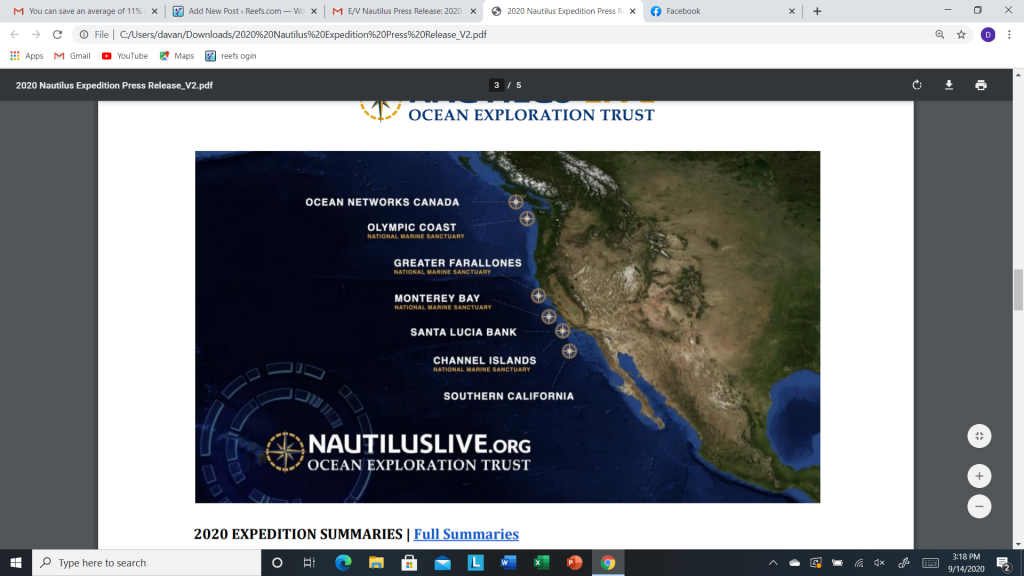 Join the Nautilus Exploration Program for its 2020 Expedition as the Corps of Exploration shines new light on little-known regions of the deep sea along the North American West Coast, from British Columbia to Southern California. On August 28,2020, the Ocean Exploration Trust (OET) — led by famed oceanographer and explorer Dr. Robert Ballard — embarked on its sixth year of scientific exploration in the Eastern Pacific Ocean aboard E/V Nautilus, continuing to work with expedition partners and the wider scientific community to identify and explore priority research areas.

Now, more than ever before, OET will be relying on over a decade’s worth of expertise in conducting telepresence-enabled expeditions so that scientists, students, educators, and the public may follow and participate from shore. Scientists aboard Nautilus and participating on shore via telepresence will conduct research along the Eastern Pacific Ocean with a focus on characterizing and mapping submerged United States territory and National Marine Sanctuaries as well as technological demonstrations and support for seafloor observatories. These efforts will include missions to explore deep-sea coral habitats, hydrothermal vent ecosystems, an extensive octopus aggregation, return search for meteorite fragments, and cutting-edge technological demonstrations subsea.

From September to December 2020, the expedition will be made available to the public in real-time through live streaming video on series of live events online and on social media will be launched, including expedition webinars, STEM career and student features with our team, and Explore@Home, a series featuring exploration science and technology alongside related try-at-home educational resources. Additionally, OET offers 100+ free STEAM education resources for learners in classrooms or at home including national-standard aligned activities, teaching animations, engineering design challenges, video playlists, and creative projects for learners at every age and stage. 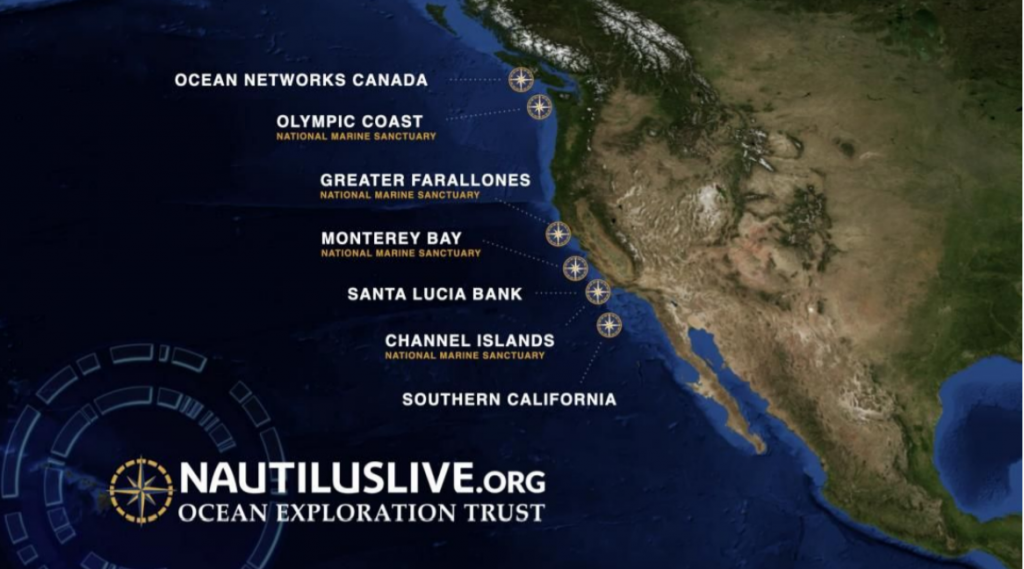 #ONCabyss Expedition Off the Coast of British Columbia | September 5-17

Over the course of 15 days, the Nautilus team will provide maintenance and support to the University of Victoria’s Ocean Networks Canada’s cabled ocean observing infrastructure located off the west coast of Canada. This 800-kilometer (500-mile) loop of fiber optic cable connects underwater instruments at various deep sea sites, including hydrothermal vent chimneys, that enables scientists to study seafloor phenomena through continuous long-term observations.

The Olympic Coast National Marine Sanctuary (OCNMS) is a biologically diverse and ecologically rich region that encompasses nearly 8,250-square-kilometers (3,200 square miles) of coastal and ocean habitats along the wild, remote and scenic Olympic Coast of Washington State. This collaborative expedition with lead scientists from OCNMS and Oregon State University will explore canyon systems within and adjacent to the OCNMS to sample communities including deep-sea coral, sponge and fish habitat, as well as unique organisms associated with more than 2,000 methane seep and hydrate locations identified in this region over the past decade. The team may also return to the

site of a large meteorite fall that we opportunistically investigated with NASA and OCNMS in 2018 in an attempt to recover fragments of the meteorite from the seafloor. The expedition is jointly sponsored by the Office of National Marine Sanctuaries and NOAA’s Office of Ocean Exploration and Research.

This expedition will visit three distinct areas of Monterey Bay National Marine Sanctuary (MBNMS), a region comprising one of the world’s most productive and biologically rich ocean areas protecting over 700 species of fish and deep benthic species. Pioneer Canyon is in the northern portion of MBNMS and is administered by Greater Farallones National Marine Sanctuary. Some areas of interest include the octopus nurseries discovered on previous expeditions located on the southeastern flanks of Davidson Seamount and the nearby actively scavenged whale fall.

This expedition aims to continue work previously conducted by the U.S. West Coast Deep-Sea Coral Initiative and the Expanding Pacific Research and Exploration of Submerged Systems. To date, the majority of seafloor characterization has focused on nearshore and shallow areas. Thanks to Nautilus’ deep-water mapping and visual survey capabilities, this mission will explore areas with critical data gaps in need of immediate management decisions. National marine sanctuaries like those that administer the Channel Islands regions are charged with conserving and managing the living and non-living resources within their boundaries deemed to be of irreplaceable national significance. Our work in this region will help to identify these vital assets and inform decisions regarding the proposed protected area.

In exploration led by a team of researchers funded by the NOAA Office of Ocean Exploration and Research, Nautilus will spend just over a week in the California Borderland area, collecting samples and data needed to generate baseline information about poorly explored, mineral-rich ecosystems associated with phosphorites and ferromanganese crusts. New mineral resources are needed to meet growing industrial demands for phosphorus, a key component of fertilizer, and rare earth elements, which drive myriad technologies and have enabled the emergence of important green technologies.

The main objective of this expedition is to test novel technology developed by partners at Woods Hole Oceanographic Institution including the Nereid Under Ice (NUI) vehicles and acoustic communications from aboard Nautilus. While the primary focus is cutting-edge technological demonstrations, testing the NUI and its associated technology on banks off southern California will allow scientists the opportunity to assess the area’s geological history and context, including adding to data collected on its history of sea level change along submerged wave cut terraces.

Our 2020 expedition season will culminate in a mapping expedition supported through the NOAA Ocean Exploration Cooperative Institute as we fill in coverage gaps located within the U.S Exclusive Economic Zone (EEZ) off the coast of southern California. All of the seafloor mapping will be conducted with both multibeam sonar and sub-bottom profiler systems.

About the Ocean Exploration Trust

OET was founded in 2008 by Dr. Robert Ballard to explore the ocean, seeking out new discoveries in the fields of geology, biology, maritime history, and archaeology to engage in pure ocean exploration. International programs center on the scientific exploration of the seafloor, innovating new ways and technologies to conduct exploration, as well as engaging and educating the next generation on the significance of science, technology, engineering, art, and mathematics (STEAM) and their relationship to ocean science.

Expeditions are launched from aboard Nautilus — a 64-meter (210-foot) research vessel — and from other OET charters to deploy our mobile remotely operated vehicle system. During expeditions, we offer onshore explorers live video, audio, and data feeds from the field in addition to ship-to-shore interactions with classrooms and learning venues for students. We bring educators and students of all ages aboard during deep-sea exploration, offering them hands-on experience in ocean exploration, research, and communications. OET is committed to working towards creating more diverse and inclusive programs — both at sea and on shore — to ensure our exploration and education programs include, amplify, and make space for more BIPOC voices in the deep-sea exploration and STEM communities.